Traveling is one of the most adventurous and pleasant experiences one can experience in their life. The more we travel, the more interesting and meaningful our lives become.

When you’re travelling, every new day is filled with excitement and adventure. We eagerly anticipate the surprises that lie ahead on the next day.

Iceland is one of the many stunning locations that one must visit in their life.

Iceland has incredibly pure air, and its untamed, rocky landscapes are still inviting for exploration and unique adventures. One method to see Iceland is on your own with a rental vehicle for a few days to a week, making sure to take a tour around the entire island on the Ring Road.

12 Must visit places in Iceland:

One of Iceland’s most well-known tourist attractions is the Aurora Borealis, often known as the Northern Lights. The solar wind, or flow of ions emanating from the sun, is associated with auroras.

The earth’s magnetic field traps these particles, which then hit with air molecules to release energy bursts that are visible as sizable circles around the poles. This magnificent natural light display is best enjoyed in isolated locations and is especially beautiful during periods of enhanced sun activity.

Since the Northern Lights’ arrival is unexpected, the majority of hotels and accommodation providers may provide you daily forecasts before you go to sleep and put your name to an overnight call list. 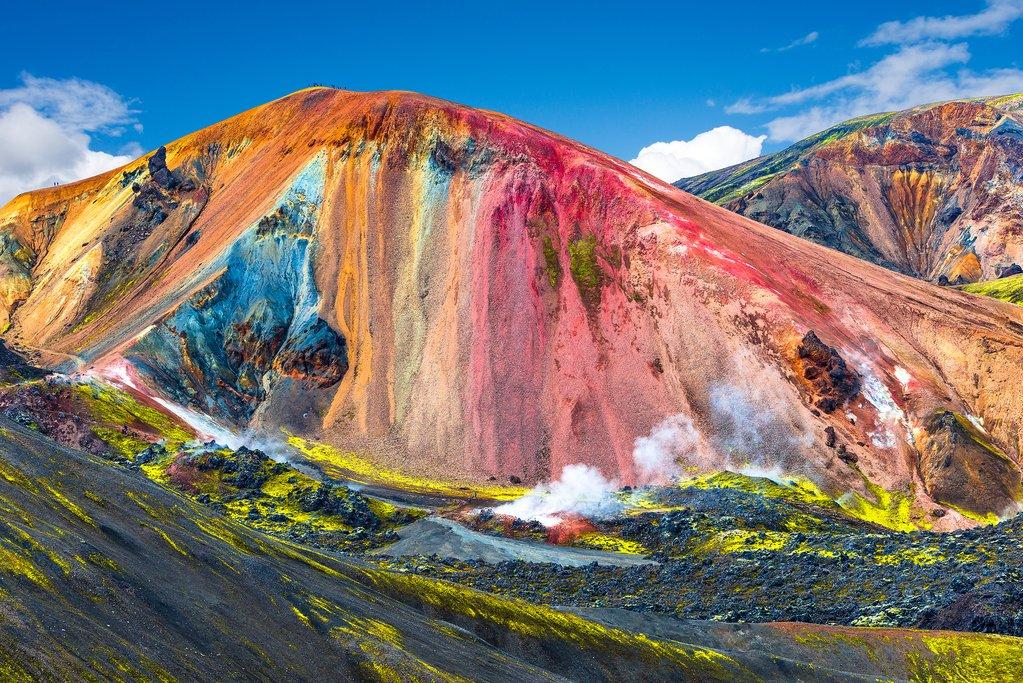 One of Iceland’s most well-liked tourist sites is Landmannalaugar National Park, located 180 kilometres from Reykjavik in the south of the country. The multicoloured rhyolite mountains, the Hekla volcano, and the vast lava fields make up this mysterious landscape’s principal characteristics.

Here, it’s common to go horseback riding and hiking, and excursions can last anything from a few hours to several days. Between June and late September, when you may go, the road is blocked. 75 people can stay at the Landmannalaugar Hut, a mountain lodge with few amenities. Expect untamed environment, rough terrain, and breathtaking vistas. 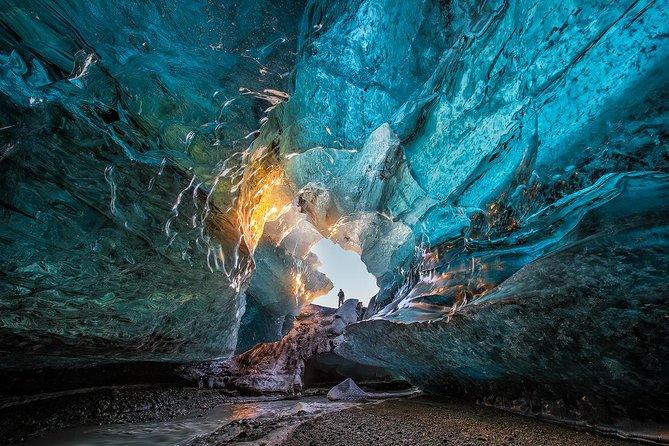 Vatnajökull National Park in the south of the nation is a place of glaciers and stunning ice caves that draw explorers from all over the world. One of three national parks in Iceland, Vatnajökull Glacier and its environs make up the huge national park, which is separated into four areas.

Numerous tourist centres may be found; those at Skaftafell Ice Cave and Höfn are open all year, although those in Skruklaustur and Jökulsárgljfur are closed during the winter. The greatest time to explore Skaftafell Ice Cave is in the winter, when a particularly severe downpour has removed the glacier’s topmost layer.

The cave is illuminated with breathtaking blue light if seen at the correct moment. Off-season, group excursions to all locations are possible. You could think about going on a glacial trek with an expert guide if you are in good physical form. You may witness glacial crevasses and caverns on the excursions, and you can even sip fresh water from surface pools for an amazing experience. 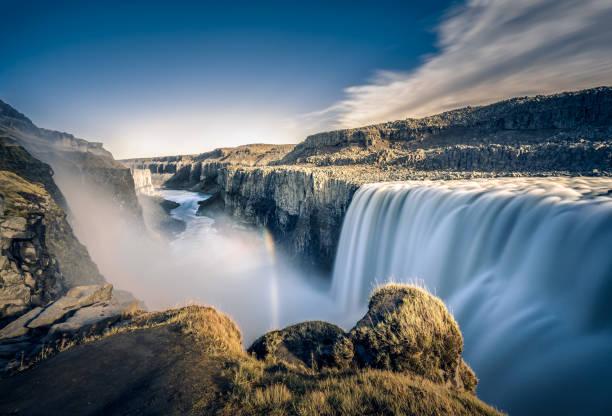 A stunning illustration of nature’s unbridled strength can be seen at Dettifoss, which is located in the park’s northern region. Having a 100-meter breadth and a 45-meter drop, it is regarded as Europe’s most powerful waterfall.

Generally speaking, the better road on the east side of the River Jökulsa is where you should approach. Selfoss is a lesser waterfall with a plunge of around 10 metres, located about one kilometre upstream along simple routes from Dettifoss. The Hafragilsfoss waterfall plunges 27 metres into a narrow gorge below Dettifoss. Driving is preferable to walking to get to Hafragilsfoss. 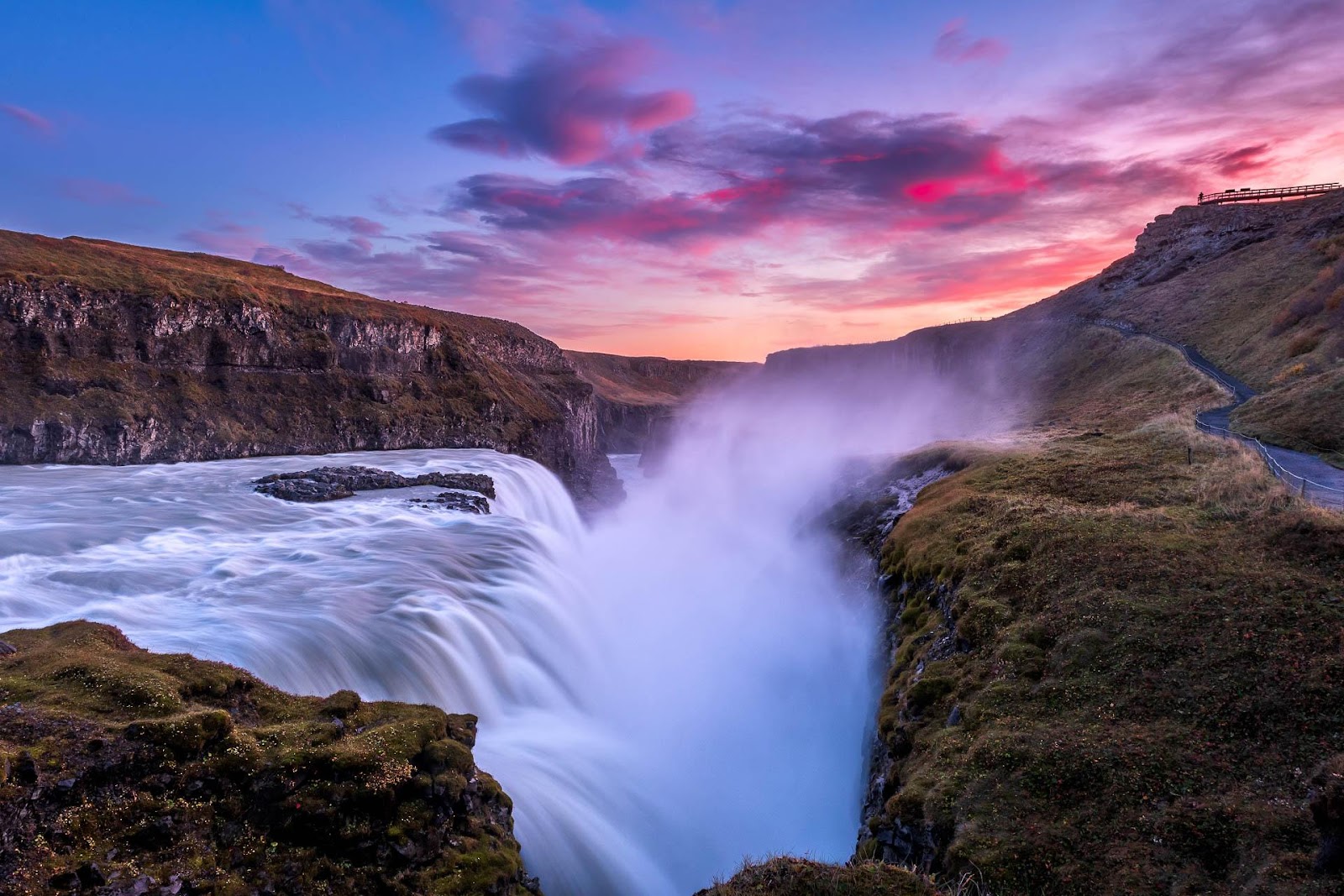 West of Reykjavik, the magnificent Gullfoss Waterfall is about a 90-minute drive away. A canyon formed by three step terraces and the river Hvtá’s descent create a strong torrent. Gullfoss consists of two waterfalls; the lower one cascades roughly 21 metres while the higher one descends 11 metres.

Gullfoss receives torrents of water at an average rate of 109 cubic metres per second, however extreme flooding has seen rates as high as nearly twenty times that. Warning: there are no rails or obstacles here; only a spine-tingling spectacle to be enjoyed in natural settings.

Myvatn in northern Iceland is accessible through an easterly drive of about an hour from Akureyri. It is a region of lakes known for its abundant birds, diverse wildlife, and sizable shallow body of water. The region is said to have been produced by a massive lava outburst some 2,500 years ago.

The area is now experiencing volcanic activity, and an eruption just happened in the middle of the 1980s. This unusual terrain, which is continually changing, includes bubbling clay pits, sulphurous vapours, and lava formations.

The rootless vents created by the volcanic explosion are one of the most fascinating natural features of Myvatn. The landforms, which resemble craters but lack a lava flow, were nonetheless produced by volcanic activity, giving the area surrounding the lake a magnificent and distinctive aspect.

The name Myvatn, which refers to the abundance of midges here, especially in the summer, literally means “midge-water,” so be sure to bring some bug repellent. Additionally, it is a haven for bird watchers.

Iceland is home to many incredible natural beauties, but the Jökulsárlón Glacier Lagoon is one of the most impressive. In a boat, you will go past enormous icebergs that have broken off from the glacier.

The size of the floating ice in the lagoon varies from that of tiny stones to that of vehicles, yet because you are floating with them, you may go near enough to touch them. In this natural setting, see the blue tint of glacial cave formations and birds soaring overhead.

Visitors who wish to make Reykjavik their home base and take a day excursion to this top site frequently choose the South Coast and Jökulsárlón Glacier Lagoon Day Tour from Reykjavik. 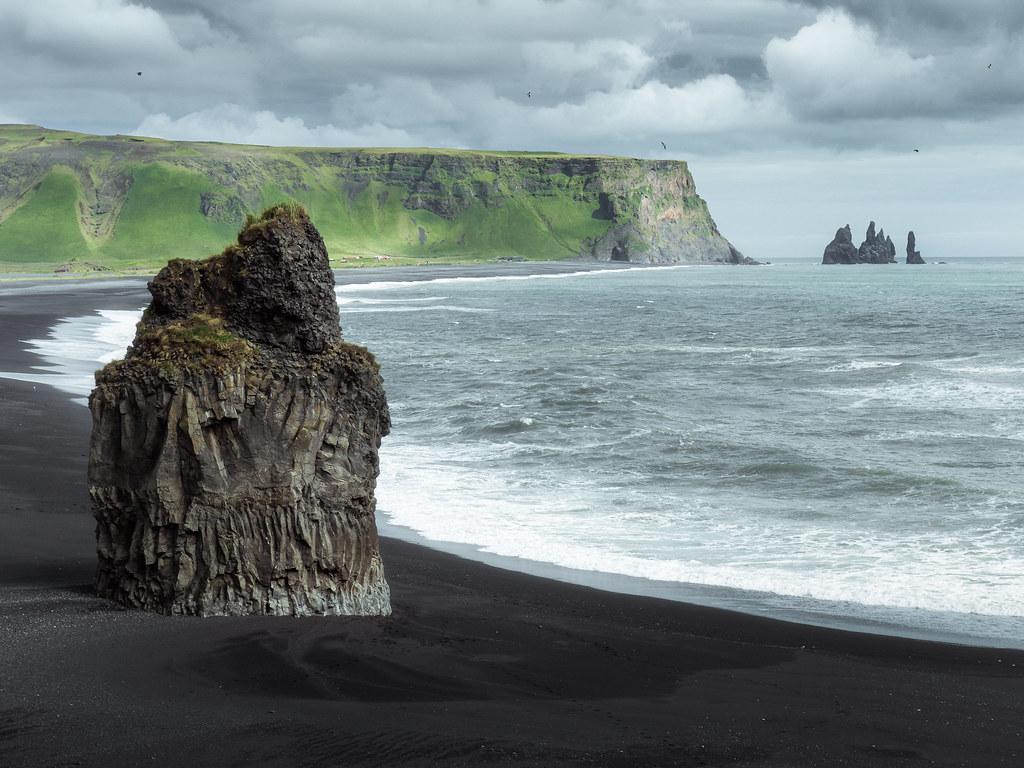 Iceland has several beautiful beaches, but the Reynisfjara black-sand beach on the southern coast of the nation seems otherworldly. The distinctive features of this beach include its black sand and jagged sea stacks that jut out into the sometimes violent waves flowing in from the Atlantic Ocean.

One of the explanations for choosing Reynisfjara beach as a filming site for movies like Star Wars is the creepy yet breathtaking natural beauty of the area. Anyone who appreciates photography must go to this beach since the lighting enhances its striking contrast.

Reynisfjara Black Sand Beach shares ominous legend with other Icelandic natural sites. According to an Icelandic folklore, the rocky sea stacks made of basalt were formerly trolls that pulled ships ashore at night before turning stone before day.

Trolls are unlikely to be present when you visit, but you could spot some of the numerous seabirds that nest in the columns, including puffins, guillemots, and fulmars.

The beach is a simple 2.5-hour drive from Reykjavik, or if you want to spend more time at some of the other attractions on that side of the island, you may join a guided tour around the southern coast that stops here. 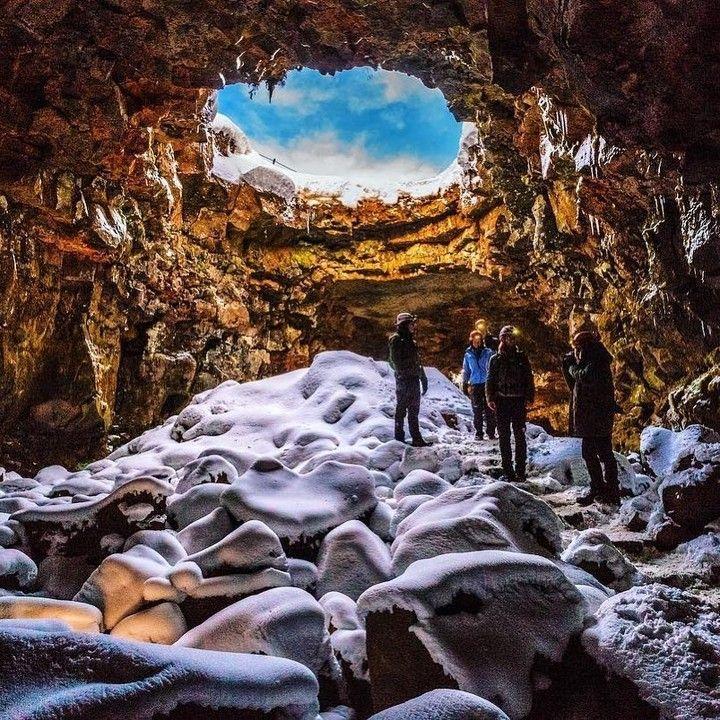 Visiting the land of fire and ice is an amazing scientific lesson into how volcanoes function since it has so many fascinating natural features. Visit the Raufarhólshellir lava tube in southwest Iceland as one method of learning more.

It is one of the nation’s longest lava tubes, measuring 4,461 feet. You may go on a guided tour of the cave to get a closer look at the magnificent lava rock formations and vibrant walls that have developed underground.

You may travel along the passage where lava poured during the Bláfjöll Mountain Range’s volcanic outburst more than 5,000 years ago by taking a tour of the tunnel. These tunnels developed as flowing magma thickened, solidified, and produced a crust ceiling that led to lava tubes.

You may observe gorgeous green moss covering lava rock and eruption craters outside the lava tube. You may go there any time of year; Reykjavik is only about a half-hour away. Plan to dress in additional layers and sturdy footwear for cold and damp weather if you visit in the winter.

Soak in the Blue Lagoon, Grindavík 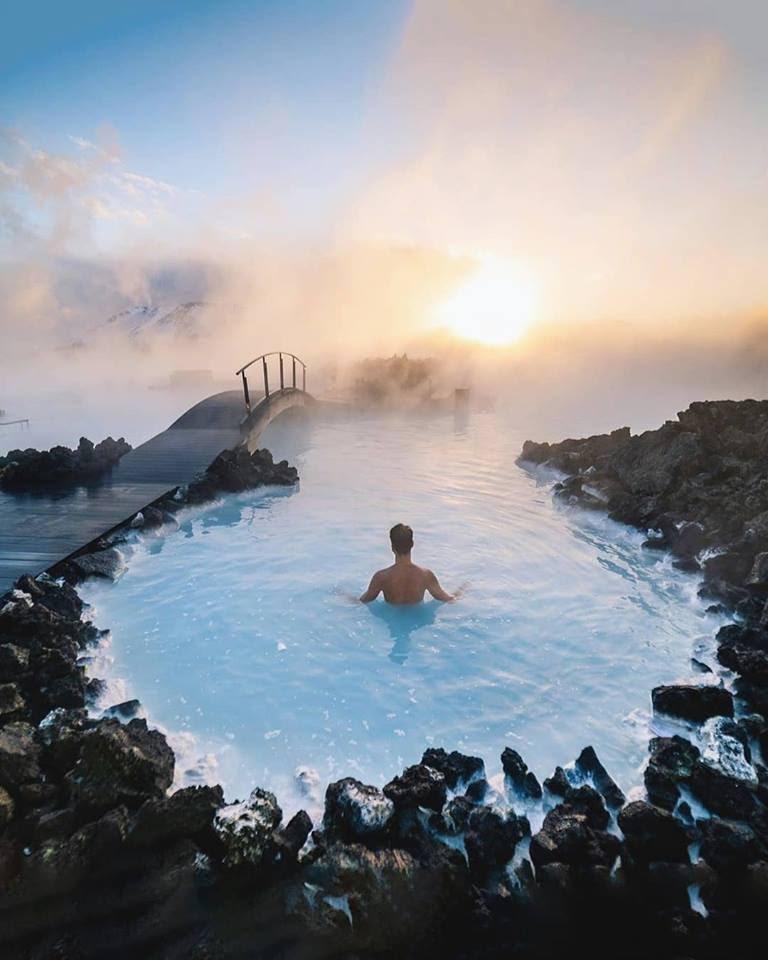 This most famous of geothermal baths is a must-see tourist destination and is about 40 minutes’ drive from Reykjavk. In the shadow of a power plant, you may enjoy natural bathing in water that has a light blue colour here.

Since the Blue Lagoon originally gained popularity among residents in 1976, a whole economy has developed around this attraction. The water from the subterranean hot springs, which reaches a temperature of 37 to 39 degrees Celsius, is reputed to provide several health and skin benefits.

Don’t dismiss the hypothesis if the ardent Icelanders are anything to go by. In addition to swimming in a distinctive environment, there is a store offering skincare items, a variety of spa services, and places to dine and drink. Visit Iceland and be sure to stop here.

Apply a mask made of mineral-rich natural mud from one of the baths along the lagoon’s edge. You may stay at one of the Blue Lagoon’s two hotels and add on a day at the Retreat Spa for the most peaceful vacation ever.

It is simple to arrange a bus excursion to the Blue Lagoon from Reykjavik, but if you want to experience more of the adventure that is Iceland, you can also arrange a day trip on an ATV that will have you go there via lava rock roads and return by coach to your accommodation.

Ride to the Top of Hallgrímskirkja 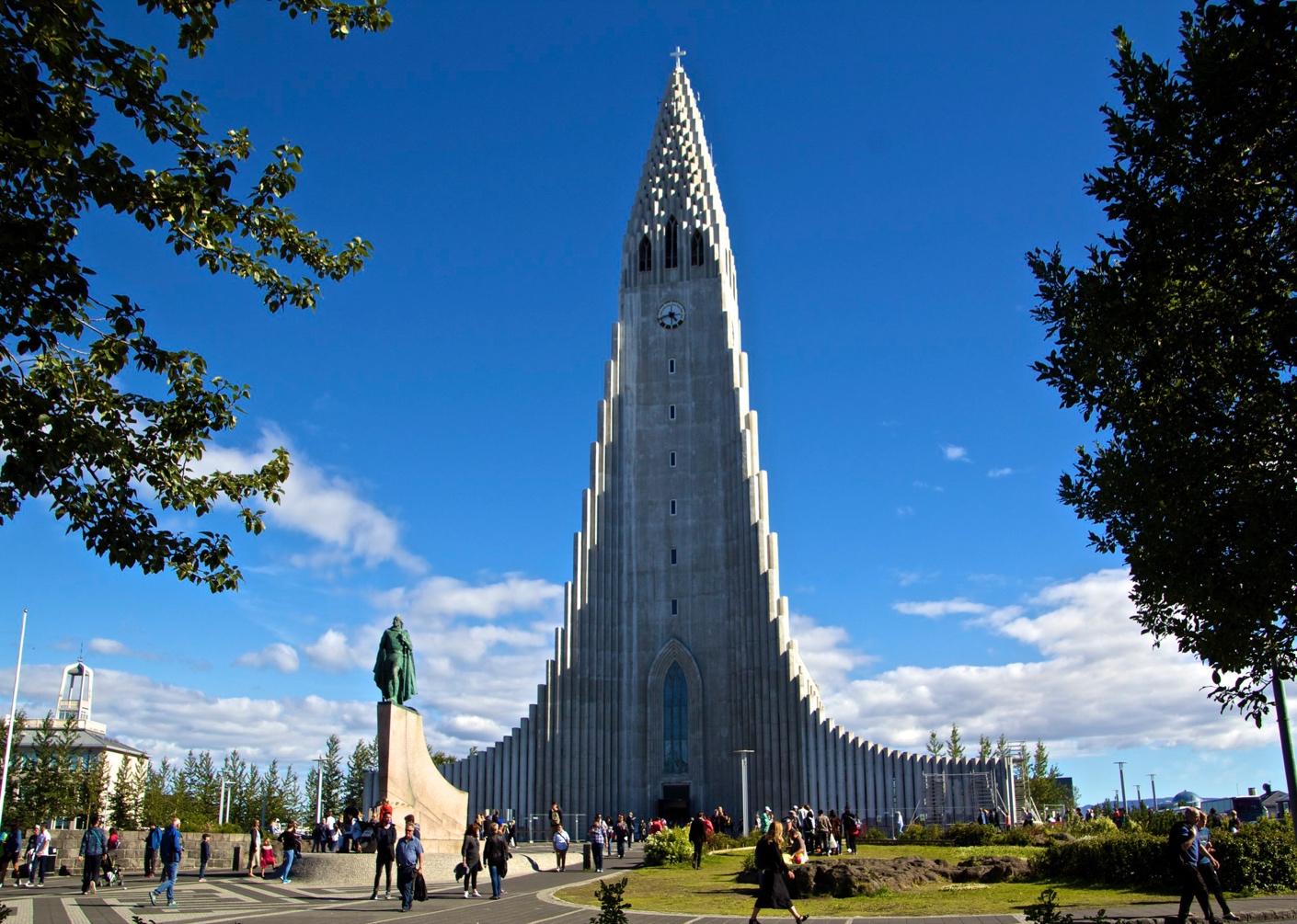 This aesthetically arresting cathedral, a Reykjavik modernist landmark, is one of Iceland’s biggest tourist destinations, and it’s easy to see why once you see it. It is the nation’s tallest and most recognised structure.

One of Iceland’s natural beauties, the Black Falls (a basalt rock structure), served as inspiration for the building’s architecture. The 73-meter-high tower’s summit is a particularly worthwhile ascent. You will be treated to breathtaking views of the city and its surroundings from this location.

A monument of Icelander Leifur Eiriksson, also known as “Leif the Lucky,” who was the first European to find America about the year 1,000, can be found in front of the cathedral. He appears to have predated Christopher Columbus by some 500 years. You may ride the elevator to the top for a modest price and enjoy the greatest panoramic views of Reykjavik.

The Vikings who established in Iceland have a fascinating history, and trolls and other mythical creatures continue to have an impact on Icelandic society today. Visits to some of Iceland’s museums are among the most engaging ways to learn about the diverse strands of Icelandic culture. While some of them appear to be mainstream, others may be discovered sometimes off the beaten way and explore some very unexpected findings.

The National Museum of Iceland is a great site to go in Reykjavik if you want to learn about the history and settlement of Iceland. Before visiting some of the other sorts of museums, the Saga Museum provides some insight into the Viking legacy through life-size reconstructions of early settlers.

The Punk Museum, located in a Reykjavik backstreet, is a fun place to start your trip to a strange museum since it explores the 1970s-era punk music scene in Iceland. Another worthwhile experience is the rbaer Open Air Museum (located inside the Reykjavik City Museum), where you can see more than 20 structures that together make up a miniature early settlement town.

The Viking World Museum, located in Njarvk not far from Reykjavik, features exhibits on the Norse colony as well as an identical reproduction of a Viking ship that was found in Norway in the late 1800s.

The Sigurgeir’s Bird Museum in Mvatn is one of Iceland’s most distinctive museums. More than 300 preserved bird specimens from more than 180 species are on display in the little museum.